Or these questions about income inequality:

Or we might make these claims about income inequality:

Political science is all about asking and answering questions. But the best approach to answering a question depends on the type of question.

I break the questions we might ask (or claims we might make) about politics into three types: normative, descriptive, and causal. Answering each type question requires a different approach.

Normative questions ask: “What should the world look like?”

These are normative questions, if perhaps somewhat ill-formed. They are important questions. Some political scientists, called “political philosophers” or “normative political theorists,” focus on these types of questions.

Some important questions asked by normative political theorists include:

We will not focus on these types of questions.

However, we all bring normative views with us, and these views are helpful. Normative views can motivate us to focus on certain descriptive and causal questions. For example, perhaps you believe that democracy is the most normatively desirable form of government. This might lead you to describe how well democracy works in the U.S. (descriptive) or explain why some countries remain authoritarian (causal). Perhaps you believe that governments should not torture. This might lead you to describe the extent to which certain states use torture (descriptive) or the types of institutional arrangements (independent courts?) that reduce torture (causal).

Reversing the cycle, answers to descriptive and causal questions might inform our normative views. For example, if you know that a majority of the U.S. public supports marriage equality, then you might think the U.S. should allow gays and lesbians to marry. If you know that income equality reduces economic growth, then perhaps you think the U.S. should adopt a more redistributive economic policy.

For this class, we’ll not focus at all on normative questions. Instead, we’ll focus on descriptive and causal questions.

Descriptive questions ask: “What does the world look like?”

Descriptive questions ask for simple observations—a description of the world.

For example, we might want to ask the following questions:

Answering these questions requires some sort of conceptualization (i.e., what do we mean by “polarized”?) and measurement (i.e., how can we quantify “polarization”?). But all that is required is observation. All we need to do make the appropriate measurements (i.e., gather data).

Causal questions ask: “Why does the work look the way it does?”

Causal questions ask about a cause or an effect. They ask for an explanation–why did something happen? We might be interested in the following causal questions:

Causal questions and claims are about action. We have one variable acting on another. There are lots of verbs that summarize action: causes, influences, affects, changes, increases, decreases, etc. Causal questions ask us to use these sorts of verbs to describe the way the world works.

We use the word “cause” quite a bit in everyday language. We might say, for example, that smoking causes cancer. In making causal claims about politics, we might say things like “wealth causes democracy” or “education causes turnout.”

But what do these causal claims really mean? What does it mean for something to cause something else?

For example, suppose Amy has a college degree and voted in 2012. But we want to know if the college degree caused Amy to vote. In order to answer that question, we simply need to consider the counterfactual world in which Amy did not receive a college degree. 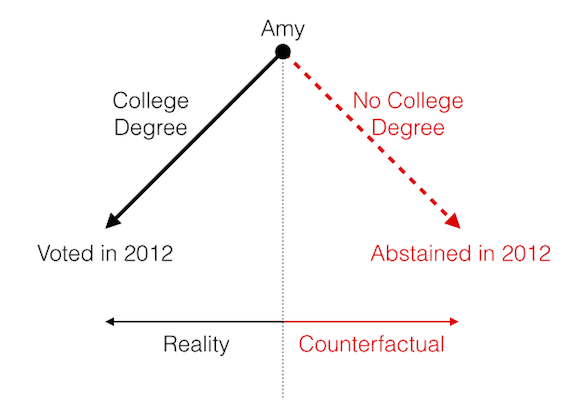 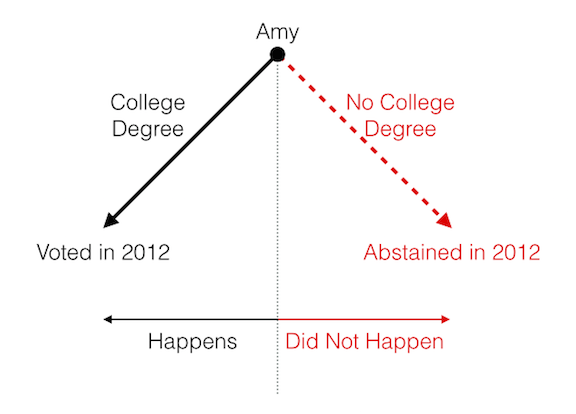 It turns out that these questions are quite difficult to answer. We refer to the problem as “the fundamental problem of causal inference.” 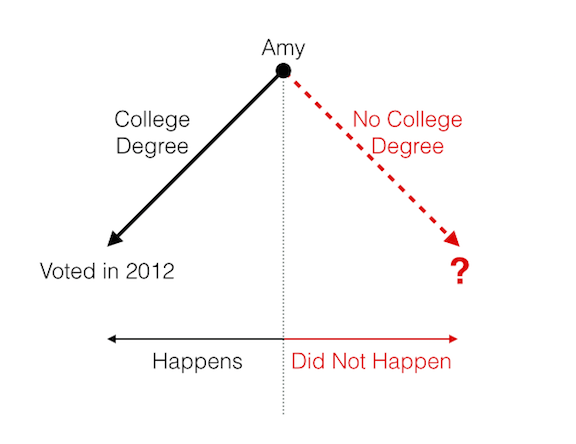 There are some tricks to get around this problem, but it changes the question somewhat. For example, if the researcher randomly assigns subjects to a treatment or control group, she can discuss the “average causal effect.” We’ll discuss this in detail later, but be aware that we’ll fight with this problem all semester.