R is a complex, powerful statistical programming language. It’s also free! I use R to do all my empirical and methodological work. I use R to wrangle data, fit statistical models, perform simulation studies, and draw graphics.

R works by scripts. The user writes a program called a “script” or program; R executes the program. This might intimidate you a little. That’s okay. It’s easier than it sounds, and Rob (our fantastic TA) and I (your mediocre professor) are here to help you.

We’ll learn a lot about R this semester, but we’ll learn only some aspects of R. I have to include some features of R and exclude others. Just because I show you one way to tackle a problem doesn’t mean it’s the only (or the best) way. But in order to get you working with data ASAP, we have to exclude some important concepts and tools in R.

This is important. I caution you against googling for help. I have put together a coherent sequence of skills. If you go off own your own, you’ll hop outside that sequence. Instead of seeking help elsewhere, refer back to my notes, and ask me and Rob questions.

Rather than use R directly, though, we’ll use RStudio to manage and run our R programs. RStudio is simply a way to organize our R code. A good analogy is a desk–RStudio helps us keep our desk neat and tidy while we work. I use RStudio for all my R programming. I even use RStudio to write documents and make presentations using RMarkdown. I write my notes and build my course websites with RStudio.

To make things even simpler, we’re going to use RStudio in the cloud. This avoids lots of issues with setting up your computer for statistical computing. The only downside is that the cloud is noticeably slower than a local installation of RStudio.

R as a Calculator

To get started with R, just open up RStudio and look around. If you want, you can use R like a calculator–just type directly into the console as you would a calculator. 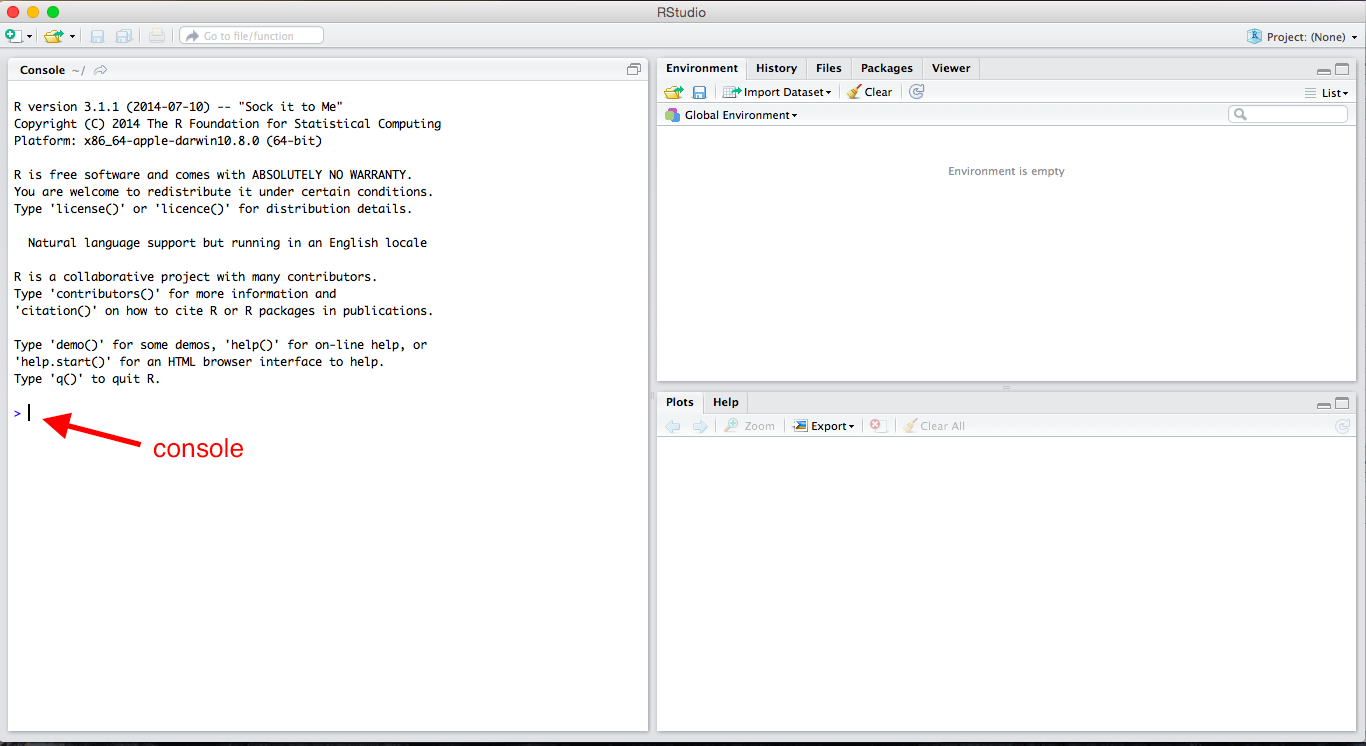 Using R as a calculator, calculate the following (in the console):

Ultimately, we’ll want to write all of our code in scripts so that we can modify, reproduce, and check our work. From now on, almost everything we do will go in a script. The idea is not to do an analysis, but to write a script that can do an analysis for us. 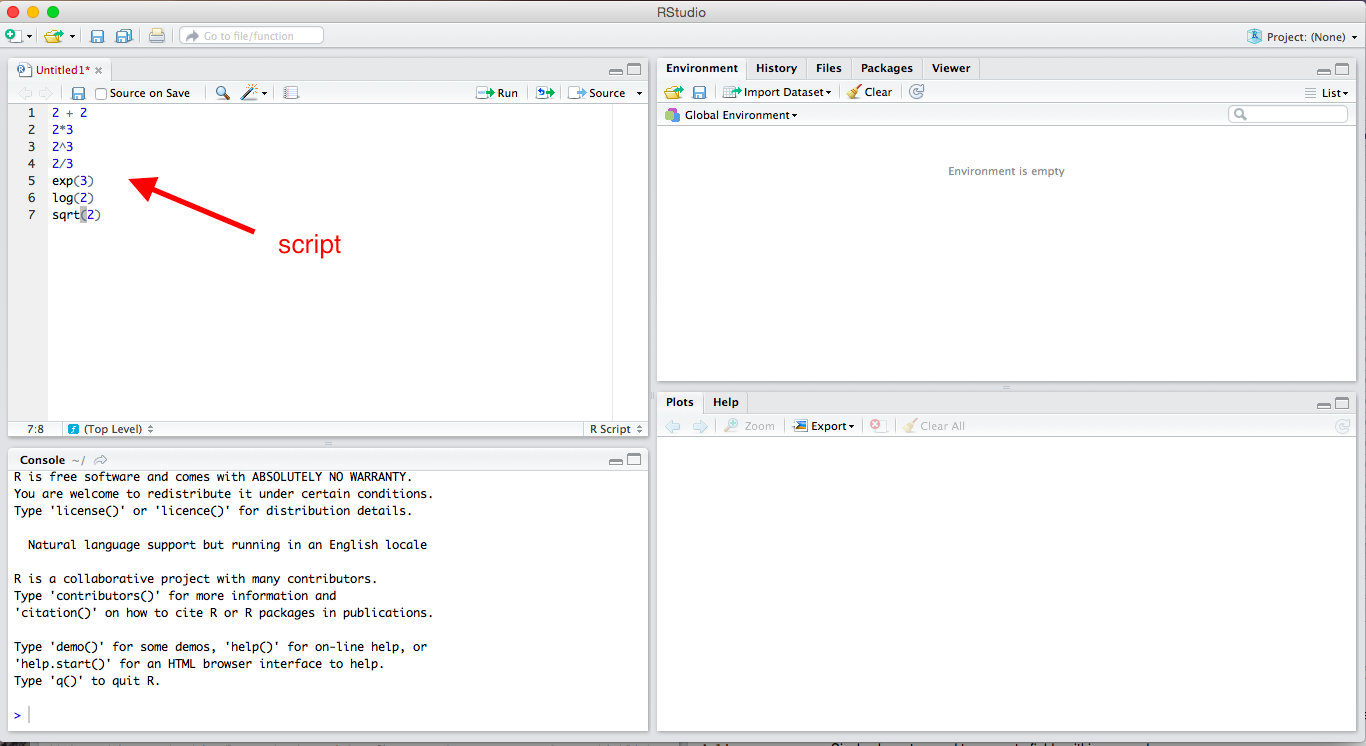 To save this script, simply click File > Save. I discuss where to save files a little later, but for now, just realize that R scripts will have a .R extension, such as my-script.R or important-analysis.R.

Doing your work in a script is important. You might have done a statistical analysis before or at least manipulated data with Excel. Most likely, you went though several steps and perhaps ended with a graph. That’s fantastic, but there are several problems.

Scripting solves each of these problems.

You can also insert comments into R scripts. This is very important, especially when you are first learning to program. To insert a comment, simply type a pound or hash sign # (i.e., “hashtag” to me) anywhere in the code. Anything on the line after the hash will be ignored. I’ll always carefully comment my R code, and I’ll be even more careful about it for this class. Here’s an example of some commented code for the previous example. 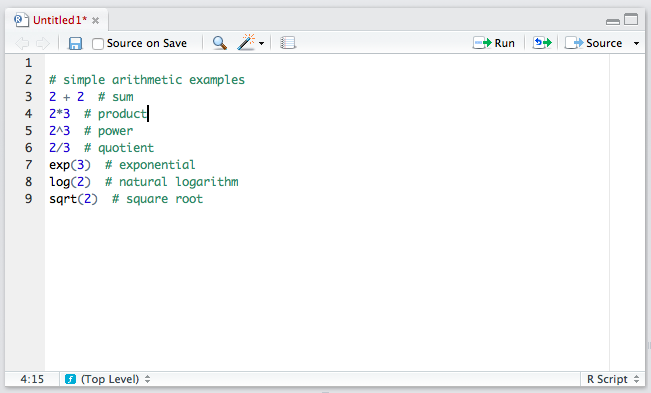 ProTip: Use comments often to clearly describe the code to others and your future self.

But R is much more powerful than a simple calculator, partly because it allows object-oriented programming. You can store things as “objects” to reference later. Just about anything can be stored as an object, including variables, data sets, functions, numbers, and many others.

Let’s start with a single number, sometimes called a “scalar.” Let’s create an object b that holds or contains the number 2. To do this, we simply use the assignment operator <-, which we read as “gets.”

We can be very creative with naming objects. Rather than b, we could have used myobject, myObject, my.object, or my_object. From a style perspective, I prefer my_object or important_variable. In general, you want to give objects descriptive names so that you code is easy to read, but short names so that the code is compact and easy to read and write.

We can now repeat some of the calculations from above, using b instead of two. Given that you know b equals two, check that the following calculations make sense.

You probably realize that it would be easier to just use 2 rather than b. But we’ll be doing more complicated calculations. Rather than b holding scalars, it might hold thousands of survey responses. Rather than applying a simple function, we might apply many functions.

So what is a function? In the above examples exp(), log(), and sqrt() are functions. Importantly, functions are followed immediately by parentheses (i.e., (), not [] or {}, which have different meanings). Arguments are supplied in the functions that tell the function what to do. We separate multiple arguments with commas.

You probably didn’t think about it at the time, but you can use many different bases when taking a logarithm. What base did we use when we ran log(b)? To see this, let’s open the help file. 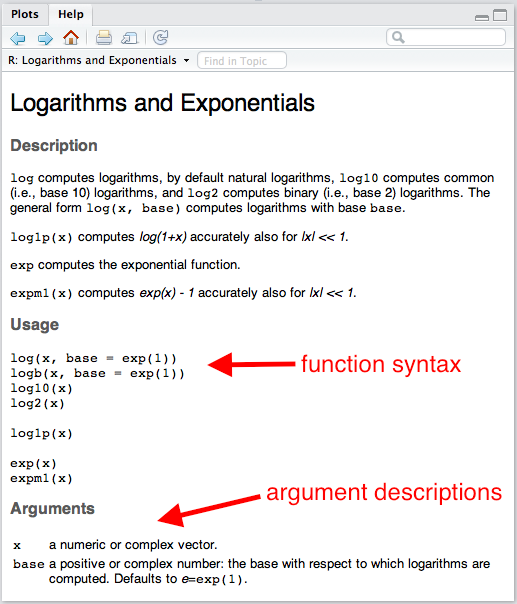 The section “Usage” shows the typical function syntax. The log() function takes up to two arguments. The first argument x is a “numeric vector.” We’ll talk more specifically about numeric vectors below, but for now, we can consider a scalar as a numeric vector. If we provide the arguments in the same order that the appear in the functions in the “Usage” section, then we do not have to name the argument, but we still can. For example, log(b) and log(x = b) are equivalent.

ProTip: If you need to know how to use a particular function such as exp(), then type help(exp) or ?exp into the console.

You’ll also see from the help file that the default that default is base = exp(1), where exp(1) is just the number \(e\), the base of the natural log. This means that if you don’t specify base, it will use base = exp(1).

ProTip: If arguments are supplied to functions in the correct order, then names are unnecessary. However, names should be included whenever there might be doubt about the meaning of the argument. In practice, this most often means leaving the first argument unnamed and naming the rest.

But if we can only work with single numbers, we won’t get very far.

When we do statistical computing, we’ll usually want to work with collections of numbers (or collections of character strings, like "Republican" or "Male"). In an actual problem, the collection might contain thousands or millions of numbers. Maybe these are survey respondents’ ages or hourly stock prices over the last few years. Maybe they are a respondent’s sex (i.e., "Male" or "Female") or party identification (i.e., "Republican", "Democrat", "Independent", or "Other").

We’ll call this collection of numbers or character strings a “vector” and we’ll refer to the number of elements in the vectors as the “length” of the vector.

There are several types of vectors, classified by the sort of elements they contain.

Rather than the scalar 2, for example, we might want to work with the collection 2, 5, 9, 7, and 3. Let’s assign the collection above to the object a.

We can create a vector using the “collect” function c().

ProTip: To create a vector, one tool we can use is the “collect” function c().

If we want to look at the object a, we need to enter a on a line by itself. This will print the object a for us to inspect. But since we only need to check this once, maybe we just type it in the console instead of including it in the script.

So far, we’ve only used numeric vectors–vectors that contain numbers. But we can create and work with other types of vectors as well. For now, let’s just illustrate two types: vectors of character strings, factors (and ordered factors), and logical vectors.

Character strings are simply letters (or numbers, I suppose) surrounded by quotes, such as "Republican" or "Male". If we put c() (i.e., “combine”) together multiple character strings, then we have a character vector.

A factor vector is much like a character vector, but can only take on predefined values. While we might use a character vector to encode a variable that can have a variety of values (e.g., respondent’s name), we might use a factor to encode a variable that can take on just a few values, such as party identification (e.g., “Republican,” “Independent,” “Democrat,” “Other”). We refer to the possible values of a factor as the “levels.”

Creating a factor is more tricky than creating a numeric or character vector. We might take several approaches, but I suggest the following two-step approach:

We can fix these two problems by using a factor vector instead.

You can see that by creating a factor variable that contains the level information, we can see that we have no Independents in our sample of four respondents. We can also control the ordering of the categories.

Missing data are extremely common in statistics. For example, a survey respondent might refuse to reveal her age or income. Or we might not know the GDP or child mortality rate for a particular country in a particular year. In R, we can represent these values with NA (“not available”). Notice that NA does not have quotes.

Try running some of the following. Make sure you can anticipate the result.